The Atlas under frame has basic molded detail.  I upgraded it to better match the prototype with Tichy components mounted on folded brass brackets.  Phosphor bronze wire for the various pipes and rods was used.

Another unique item to these cars, is the use of a pressure head brake cylinder.  The cylinder has a bracket on the back to hold the rear brake lever.  I modified a Tichy brake cylinder with some bits of styrene and harvested rivets to represent the lever bracket.

I further corrected the centre sill by adding a flange on the bottom of each of the Z-26 channels and rivets on the cross bearers.  The train line was installed after everything else, because I forgot to do it at the beginning of the under frame work. I did this with short pieces of styrene rod, fitted between the cross ties and cross bearers.  I designed and 3D printed some pipe tees and used one to attach the train line to the pipe leading to the dirt collector.

The ladders were also upgraded with attachment brackets made from 0.005" styrene and harvested rivets.  Yarmouth sill steps were modified and installed to match the prototype steps.

These cars featured a Universal brake housing and wheel.  The housing is from a DA set and the wheel is a modified Kadee Universal.  The modifications to the wheel was to add 5 holes, in the middle solid section to represent the 10 slots on the prototype.  No manufacture offers a M1704 Universal brake wheel as of yet.  The running board support was replaced with Yarmouth offerings.  I scratch built the tack boards and route card holders. The retainer valve was located in a bit of an odd location, above the ladder and required some tight bends in the pipe to match the prototype install. 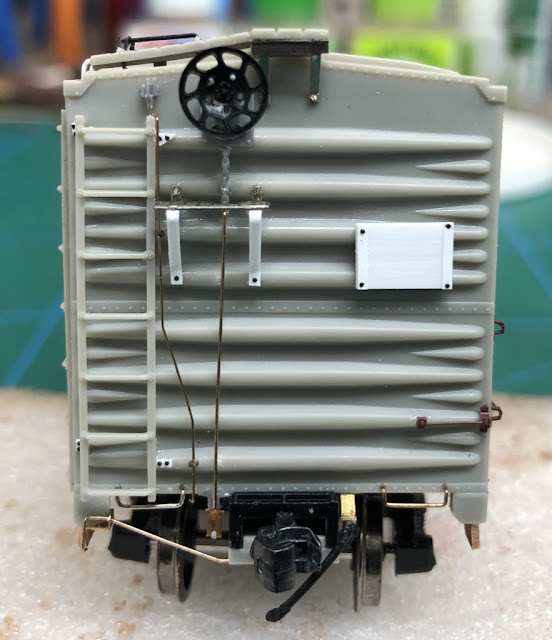 The MP and its subsidiary lines 1932 ARA box cars used a bit of an odd arrangement for the brake step.  The lower brake step supports extend down two ribs below the platform.  To capture this detail, I removed the supports from a Yarmouth Model Works brake step and made new ones from styrene strip and harvested rivets.  The photo details the other changes to the car end.


I bent up and soldered some brass cut lever brackets, and bent my own levers.  Air hose brackets from Yarmouth were used with Hi-Tech rubber hoses. 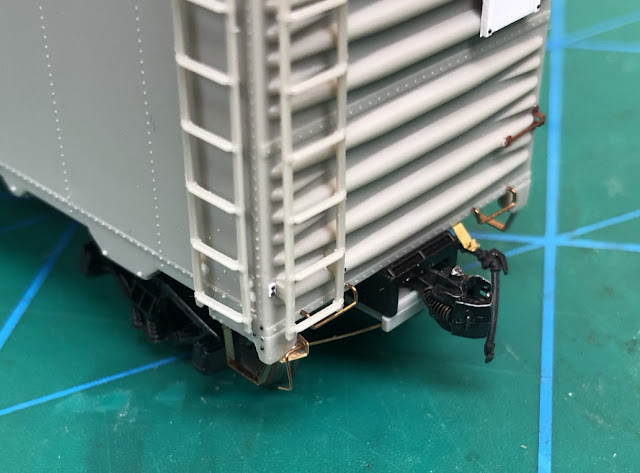 The car side is complete with harvested and Archer rivets added.  Next up is cleaning, prime, paint, and decals.  The odd cross section of ladder rungs are bugging me though.  I may replace them with 0.010" styrene rod.

I spent some time a few weeks ago and modified an Engineers Square.  I milled the thickness of the head such that it sticks out only 0.045" from the beam on either side.  This makes scribing or laying out on thin material much easier, as the blade can fully rest on thin sheet stock.  I will put it to good use on single sheathed, board by board boxcar patterns.

I also machined a small photo etch bending tool.  Its about 2" long.  I also own a 5" bender made by the small shop but I wanted something smaller that is easy to hold in one hand.  It also works great for snapping brass strips.  I accomplish this by scribing the brass in the bender and then bending it back and forth a couple of times. 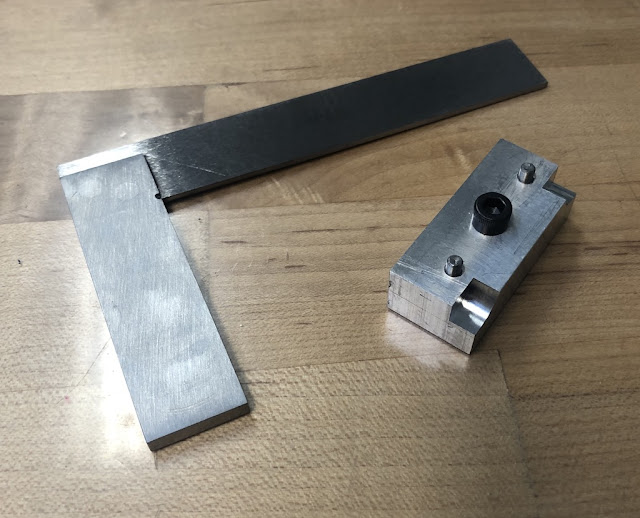