A visit with the Model Railroad Enabler

Last Evening I visited with the "Model Railroad Enabler" for his assistance in developing my new Grand Trunk Layout Plan.  I kept my guard up as I wanted to make sure I didn't come away convinced to model a different prototype.  A visit with the Enabler is sort of like meeting the Great Gazoo.

Now don't get me wrong, the Enabler has other Worldly powers in layout design, but others have been known to come out of the experience selling all their stuff and changing prototypes.

I had to my advantage that he was the one to suggest the South Paris switcher in the first place. I guess that means he enabled me almost two years ago and I didn't even know it then.

We went over may details of the benchwork and the operation of the trains and he brought up many things I hadn't even considered.  So now I wait, while he sharpens his pencil and puts it to graph paper.

Email ThisBlogThis!Share to TwitterShare to FacebookShare to Pinterest
Labels: The Enabler, Track Plan

In 1953 they were officially transferred to the Grand Trunk (NEL).  They all wore GTW white lettering on Morency Orange bodies until the late fifties, when they received Grand Trunk within a horizontal green leaf.  In the sixties they were repainted into the GT version of the CN noodle scheme.

I decided to model 77964 for my Caboose fleet.  This will be primarily used on the South Paris Switcher.  Being a centre cupola design, it lent itself for better branch line use, as it would not need to be turned.

A Walthers Grand Trunk Western wood sheathed, offset cupola caboose was used as the starting point for a kit bash.

First, I corrected the well known issue of the trucks hitting the end steps while swivelling even the slightest amount.  This was accomplished by cutting the bolsters from the under frame slightly inward of the bolster.  Then turning them 180 degrees before reattaching them.

I cut the roof in three parts and moved the cupola opening to the centre.  The pieces were glued back together in a jig to keep the new roof square.  The cupola had the windows muttons removed all around. New muttons were constructed from strip styrene for the front and rear.  The cupola side window muttons were created using Tichy muttons from one of their work car window sets. 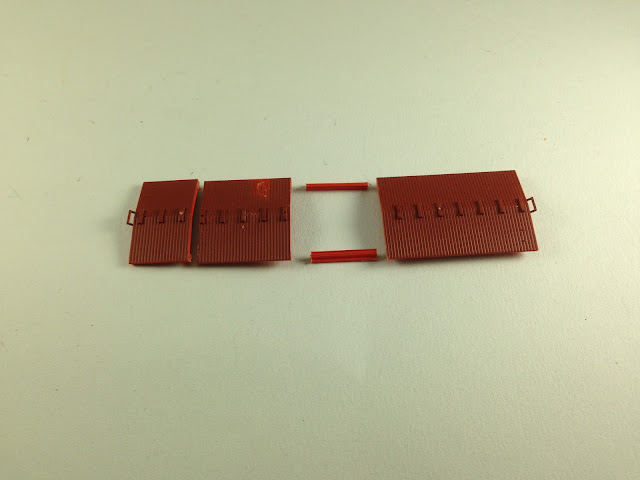 I removed the sides using my milling machine and made new ones from V-groove styrene sheet. 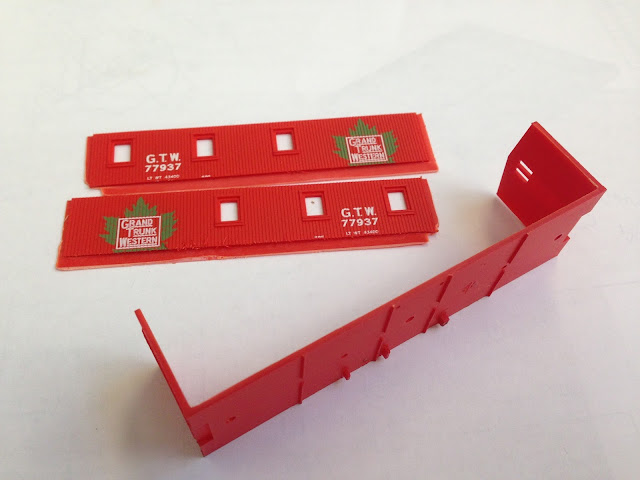 Tichy work car windows were spot on replacements for the side and end windows.  Openings were cut in the ends and the new sides to accommodate them, by first drilling holes and using my nibbler tool to finish up.

The sides were attached and the roof fitted.  The roof was sheathed in 0.005" styrene to cover up the grooves of the kit roof.  The prototype was covered in some sort of roofing material. 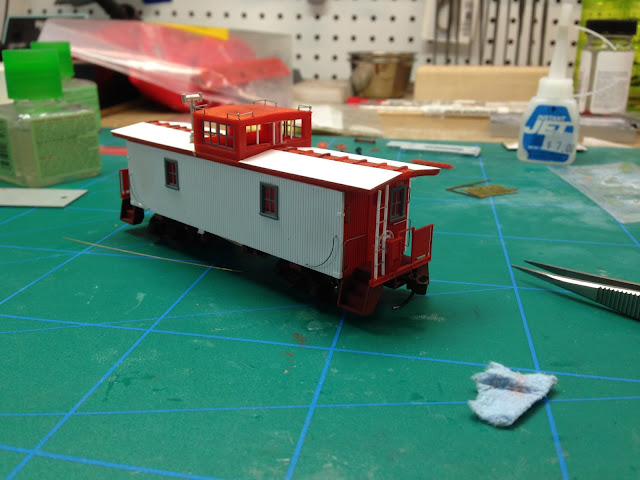 The end ladders also looked bulky so I fashioned replacements from strip styrene and phosphor bronze wire. The wire grabs from the Walthers kit were reused and mounting holes drilled where needed.  A Stove stack from Custom Finishing was fitted.